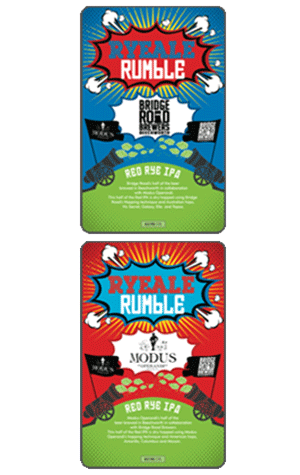 When the crew from Modus Operandi drove south from Sydney to Melbourne for Good Beer Week 2015, they made a small detour towards Beechworth and the home of Bridge Road Brewers. They say the main purpose of their visit wasn’t just to drink beer and eat Ned Kelly pies, though there’s no way to tell if that’s the truth. However, while there, they did at least take part in a double collaboration.

The way it worked was that the same base beer, using the same malt profile that included a dose of rye, was brewed before being split off into two separate fermenters. Each team of brewers was then given license to add hops of their choosing, in whatever amount they felt right in whatever manner they deemed appropriate. Bridge Road opted to showcase all-Australian hops Vic Secret, Galaxy, Ella and Topaz while the US-centric IPA lovers at Modus went all-American and used Amarillo, Columbus and Mosaic.

Here then we have two beers which are the same but different, designed to be drunk side by side and show off the new world order of hops. Both beers are available at the breweries’ respective cellar doors as of right now.