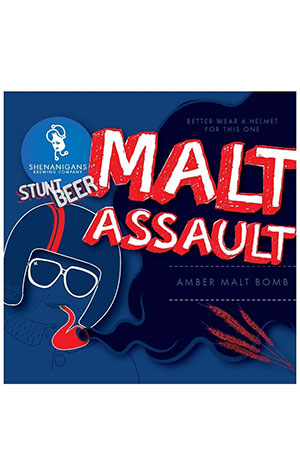 When Sam and Dan from Shenanigans got in touch with The Crafty Pint ahead of their forthcoming Winter 2015 release, there was a bit of chat about how everyone was chasing hop bombs and new hop varieties and forgetting about malt. Small talk, we thought. After all, this is a brewing company that loves its hoppy ales; their flagship beer, Winston, is a highly hopped (and all the better for it) pale ale, Imperial Winston is literally twice as hoppy still and even their four percent dry Irish stout was hopped up the wazoo.

So it was with some surprise that they revealed their next beer would not only not be hoppy, but it would be a lager. But, being Shenanigans, not all was as it seemed...

What they’ve actually brewed is a hybrid between the German styles Dunkel and Altbier, using a lager yeast but dropping in a little ale yeast to quicken the process slightly. It is, in effect, an ever-so-slightly beefed up dark lager. They used malts of the Munich variety for the body and backbone of the beer and a touch of oak smoked wheat which comes through beautifully, neither too much nor too little. There are some hops here, but all they do is add a bit of herbal – dare we say it, old-fashioned – spice character. It may look a bit murky but still drinks nice and clean while offering plenty of that malt richness and sweetness. Shenanigans love hops as much as anyone – actually, they probably love them more. But if, like them, you want a little holiday from hop bombs, a Malt Assault is definitely the way to do it.