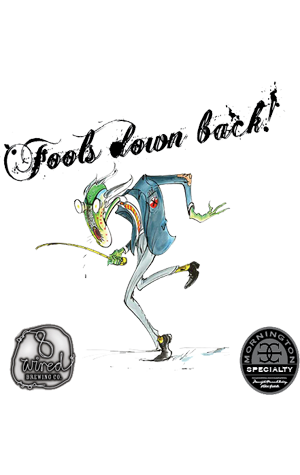 When one Good Beer Week collaboration release in a week just isn't enough... At the same time that the imperial schwarzbier from the World of Beer Masterclass at Hawkers arrives comes the beer created two days later on the Mornington Peninsula, where the brewery of that name welcomed Danish Kiwi brewing legend Soren from 8 Wired to join them for the day.

The plan was to use one of Soren's favourite toys, Brettanomyces, in particular the Bruxellensis strain, to create a Brett IPA featuring all Aussie hops, lots of them, all of which were added late on – 5kg in the whirlpool and another 5kg in the fermenters. Head brewer AG reckons it drinks more like a "hoppy saison: more tart than sour ... a 6.4 percent beast of fruity hops and bready yeast."

As for the name, that's credited to "some rather boisterous local patrons on the day".