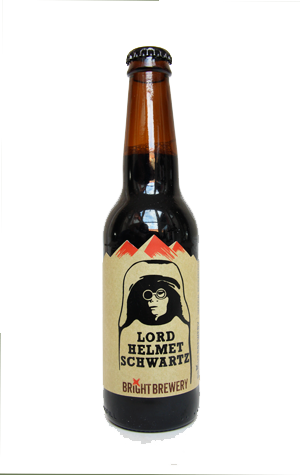 Tis the season for imperial schwarzbiers. Or at least, following the release of the Good Beer Week Masterclass collaboration, Inappropriate Touching, last week, it's the season for two of them. Lord Helmet Schwartz was Bright Brewery's entry for this year's GABS and also appears to be a reference to Spaceballs, the Mel Brooks spoof that a young Crafty Pint was taken to by his grandfather, who swiftly proceeded to honk throughout with laughter akin an excitable, ticklish seal being given a work over by Uma Thurman's thumbs from Even Cowgirls Get The Blues. Still, we won't hold that scarring experience against the brewery...

In contract to the relatively light-footed Inappropriate Touching, the Helmet pushes the malt bill to the hilt, nudging into Baltic porter territory with its depth of colour and body. It's built around a hearty bitter, dark chocolate heart and has a lingering dark roast coffee bean afterglow. A little was bottled and is available from the brewery. It's also in the first Bright Mash pack, along with Says-On – a tasty saison that's all about orange blossom, soft spice, tart citrus and sweet malts and is, again, only available via the brewery or in the Mash packs.