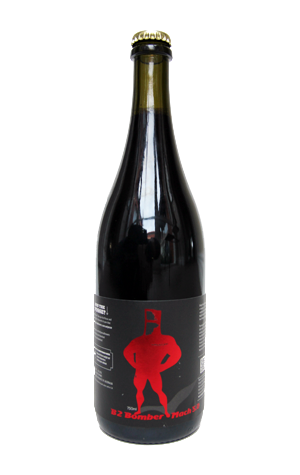 To mark ten years of brewing at Bridge Road, the Beechworth mob did what they've done in the past for their anniversary: they brewed the B2 Bomber. But bigger than ever before. The beer would fit into a category along the lines of double black Belgian IPA. Or one marked "Gauntlet Beer".

"What's a Gauntlet Beer?" you may ask.

"Something we came up with about a third of the way through the bottle," we might answer.

Well, because it's the sort of beer that feels like the brewer has thrown down the gauntlet, delivering a beer with an attitude reminiscent of the last couple of minutes of The Verve's Come On. With the hops upped, the amount of grain upped and, thus, the booze upped (by almost a full percentage point to nudge 10 percent), it settles into your glass as an impenetrable black mass, tucked away underneath an equally foreboding dark brown head. And then, rather than sending the roast and chocolate aromas you might expect from a beer of such appearance in the direction of your olfactory system, it fires off warning shots that are at first intensely hoppy then increasingly of the funky, rubbery Belgian sort possessed by all B2 Bombers.

The hops (a new selection this year that include El Dorado, Enigma and Mosaic) seem bolder than at any time (except maybe the resinous Mach 3.0), the bitter roasts of the malt feel more aggressive early on, and there's some prickly bitter liquorice action going on at the backend too.

"Drink me, I dares ya," says the Mach 5.0 via the power of ESB (Extra Sensory Beerception).

And in bottle at good beer stockists nationwide