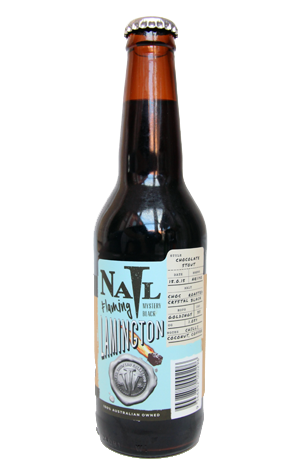 UPDATE: This beer is back – draught only – for winter 2017, featuring 80kg of toasted coconut and 25kg of birds eye chillies loaded up in giant tea bags and placed into the fermenter. It will be an annual release and may return in bottles too from 2018.

Original write up from 2015: Lamington beers have become quite a thing, it seems. Bacchus has brewed one, Quiet Deeds has one out as we write and there could well have been one entered when we took part in a past Beervana Media Brew competition. Whether any of them have yet added chilli to the mix, we're less certain. But that's what Nail has done for its seventh Brew Log release, the Flaming Lamington (or Flamo to its mates). This one is dedicated to the two doctors, Jeffs and Watson, who led the team that saved Nail founder John Stallwood's life when he was attacked and left in a coma in 2004.

Given we have something of a dislike for desiccated coconut here at Crafty Towers and, thus, for Lamingtons generally, of all the beers to come our way it's not one we're likely to stock the fridges with. However, we can report that it does achieve its goals, with that sweet, creamy coconut aroma layered atop the chocolate derived from the malt. It's accompanied by a whiff of chilli, with only the coffee that's in there failing to make much of an impression on this taster's olfactory system. That said, once the rich, chocolatey, cakey beer has passed through lips, across tongue and down oesophagus with a drying roasty flourish, it lets said olfactory system know it's been around by leaving a chilli tingle that climbs stealthily from tonsils to eustachian tube and sets up camp a while.

It's a combination that proved a winner, as the beer took out Best Stout (draught) at the 2015 Perth Royal Beer Show.