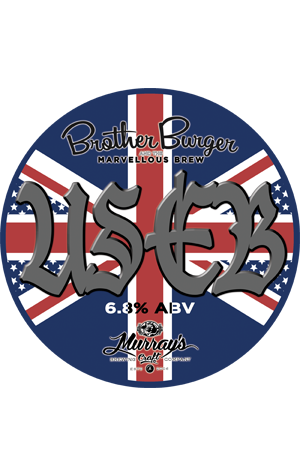 What do you do if you're desperate to get your hands on a particular beer but, to the best of your knowledge, that beer doesn't exist? For most people, your best hope is to keep hunting or to try your hand at home brewing. If you run a couple of popular beer venues, however, you could try to lean on a friendly brewer. And that's what Matt Heron, who manages the two Brother Burger & The Marvellous Brew venues in Melbourne did, calling on one of his favourite Australian brewers to help him achieve his goal.

He was on the hunt for an ESB with a New World twist, not so much the American pale ale like ESB brewed by Hargreaves Hill, but something more like the denser, richer malts found in a 4 Pines ESB but with New World hopping. Murray's agreed to help out, so he worked with them to map out the end goal, their English brewer Alex worked out the recipe, he travelled to Port Stephens to brew the beer. And, now it's been kegged, Matt has declared himself: "A little bit chuffed to be honest."

It's easy to see why. The USEB (US Extra Bitter) is one of the finest brewery-venue collaborations we've sampled, a beer with gorgeous winter appeal – dark chestnut in colour – and a well judged balance between hops, malt and booze. It's rich with toffee, treacle, raisin and nutty malts characters, has a touch of citrusy, piney American hop aroma (it features Amarillo and Chinook hops) and some orange marmalade flavours in there too. Apparently, other staff members at the Brother Burers will embark on collabs with other brewers for future brews; they can thank Matt and Murray's for setting the beer high...