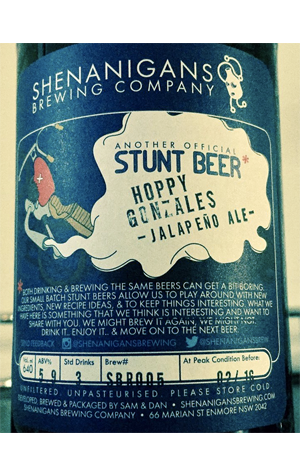 The term ‘Stunt Beer’ is an apt descriptor for Shenanigans’ ever-expanding series of one-off releases. Where a regular beer is the motorbike jumping the ramp and landing safely, Stunt Beers are the ones ridden by a flaming rider jumping through a hoop of electric eels and over a shark tank without you knowing exactly how it’s all going to turn out. They essentially take something pretty normal and throw something more exciting into the mix. In the case of the latest release, the Hoppy Gonzales, that thing is chillies.

This beer is a hoppy American ale that’s had a whole lot of jalapeños added to it. When developing the recipe at the home brew level, only three to four individual chillies were needed. When the recipe was scaled up a hundred fold, it required an eye-watering 19 kilograms of chillies and, once safety gloves and eye goggles has been donned, all of these were cut and de-seeded by hand. For all the effort, those chillies really come through with a fiery, peppery punch on the nose. On the palate they team up with the hops for a herbaceous character that’s warm, but never too hot, while the malt helps temper things nicely.

By their very nature, stunts and Stunt Beers can go awry: too much of a heavy hand on the throttle or the bag of jalapeños and all you’re left with is a burning fire to put out. But when it comes off like it does here, you’ve had a quite a memorable experience that leaves you with a strange hankering for more.

The Henson (on tap and in the new bottlo)