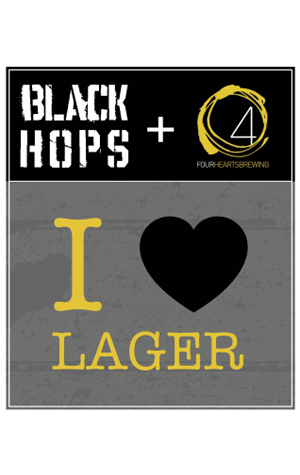 We're always keen to know the stories behind beers, particularly when there's a collaboration. Just what was it that inspired two breweries to work together: an occasion, a joint passion, a drunken bet. Of all the origin stories we've heard for collabs, the one behind I Heart Lager is one of our favourites.

According to Eddie from Black Hops: "I'm not sure to be honest. [4 Hearts founder] Wade's my cousin in law (I think that's what he is – he married my cousin) so maybe he was just being nice. We were in a cab from Brother Burger going to Moon Dog during this year's Good Beer Week when we got speaking about the brew."

Being nice works for us. The brew that followed at 4 Hearts' awesome Pumpyard in Ipswich is described as: "A clean, crisp, hoppy black lager brewed with cold pressed carafa grain to give rich black colour without the roast or bitterness you would expect from a dark beer, really allowing the hops to take centre stage." Those hops are Centennial and Amarillo so plenty of citrus fruitiness should be shining through.