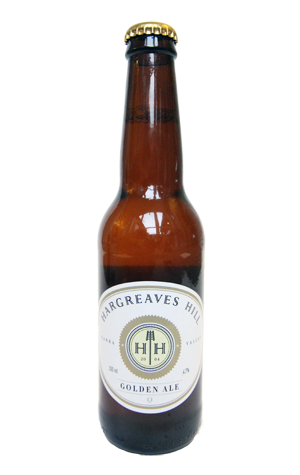 After playing around with a few recipe tweaks and trialling the beer on tap at their Yarra Valley restaurant, Hargreaves Hill has added a new beer to its core range. It's a golden ale designed to give the brewery a beer with mass appeal among drinkers who might find their hoppy Pale or popular ESB too much. And, given they already have those two New World hopped pale ales on offer, the Golden Ale takes a different tack.

It's inspired by the golden ales of Cologne, AKA Kolsch, thus eschews extravagant hop character for a much more subdued and subtle approach. The Hargreaves brewery team settled upon a mix of old school German hops (Hallertau and Perle for those who like to know such things) and European malts – plus a touch of rolled oats to fill out the palate. The result is a beer with a faintest touch of fruitiness and some soft herbal, spicy hop characters but which is mainly about its crisp, biscuity and cracker like malt flavours. The sort of ale that won't scare dyed in the wool lager drinkers away, in fact.