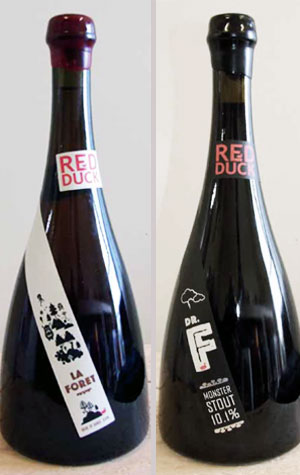 Red Duck has always presented its beers well, a legacy of head brewer Scott Wilson-Browne's pre-brewing career as a graphic designer. For its latest offerings, it's stepped things up a notch. La Foret and Dr F, two more beers to have received barrel treatment at Red Duck's Ballarat home, are the first to appear in 750ml bottles – slinky bottles at that.

La Foret is based on the brewery's Lapin, a "French Ale" brewed with French hops that's made a couple of appearances over the past year. A portion of the beer was placed inside an old Port barrel – one that still contained about 30 litres of port lees – where it lived for six months. Scott says the beer has developed "some vinous complexities [while] the ageing has soften the hops". He also reckons the formerly amber beer becomes redder and more vinous the further you get through the bottle, of which there are a mere 216 in existence.

Dr F, on the other hand, is the "monster stout" first brewed for GABS 2015. Based upon another of Red Duck's beers, Igor the Russian imperial stout, this one not only spent time in oak but had Muscovado sugar, Panela sugar, dark brown sugar, molasses, coffee, chocolate and the brewery's own 110 pod vanilla tincture added to the dark malt heavy base beer – plus some lactose to boost the creaminess. Scott tells us the six months in oak reduces the impact of the Sticklebracht hops and balances the huge malt, chocolate, coffee, molasses and vanilla flavours." If you'd care to find out, there are 312 bottles of this bad boy.