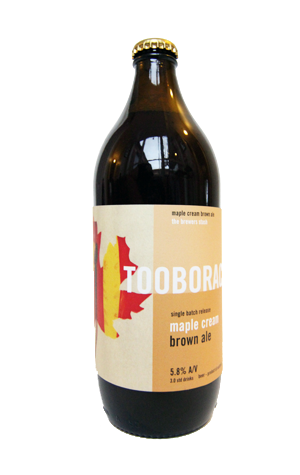 It's all change at Tooborac or, perhaps more accurately, change continues at Tooborac. It's been a while now since they installed Garage Project's old brewing kit at the back of their bluestone hotel on the Northern Highway in Victoria and a while too since well travelled brewer Stu Ritchie took over the brewing reins. The most recent change is skin deep, with the brewery's old school, English-inspired branding replaced with something more in keeping with the times.

The first beer to bear the new look is also the first beer in what they're calling the Brewer's Stash range: limited release, bottle conditioned beers that are coming out in squat 660ml bottles. They're launching the range with a quirky beer too: the Maple Cream Brown Ale is an American style brown ale with maple syrup added during the brewing process. American hops lend it some fruity, spicy and floral aromas alongside sweet caramel malts, while the beer – deep brown with a reddish tinge – attains a creaminess without become stickily full-bodied. Flavours are of the sweet maple and nutty sort, with the hops returning for a dry finish. Look out for a chocolate chilli stout to follow...