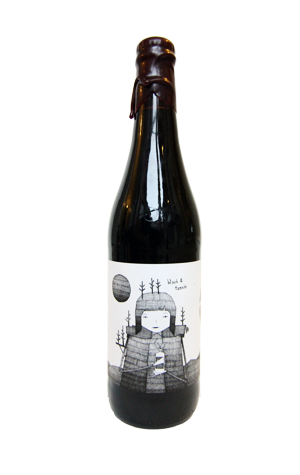 Back in 2013, Eagle Bay and Mane Liquor, the Perth bottleshop with the most ridiculous array of beers from all over the world, joined forces on Saisonnay, a saison aged in Chardonnay barrels. Two years on, they got back together to design a beer for the 2015 GABS festival, one that again combined beer and wine. This time around the chosen style was a black IPA, a beer style Eagle Bay had previous with, and the weapon of choice on the wine front was former cabernet sauvignon barriques.

The beer proved popular enough for a second batch to be brewed, aged and packaged in wax-sealed bottles complete with some of the most beautiful label artwork we've seen on an Australian release, courtesy of artist Kyle Hughes Odgers. Being totally on the ball here at Crafty Towers, we finally picked up on the beer as a third batch is underway, ready to be released in time for Christmas. So, the chances are many of you will be reading this and going: "Yes. We know. Get with the program, Crafty."

For those that aren't, what do you need to know? That the beer's appeal goes beyond its packaging and that the impact of the barriques doesn't detract from the fact it's first and foremost a black IPA. It leads off with pine-dominated hop aromas, backed up with a touch of cola, dark chocolate and, late on, vanilla, while hops dominate the taste too. There's a touch of dark berry fruits in there, the merest flicker of creamy vanilla too, plus a lingering, resinous bitterness.

More stockists when the next batch arrives