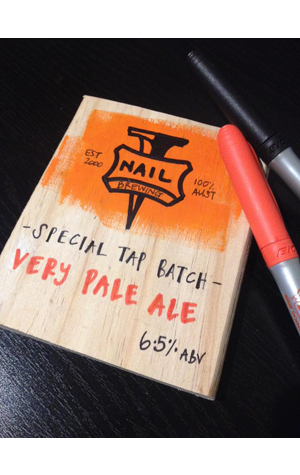 When we got word that Nail had a new, draught only beer coming out that went by the name VPA – and that the V stood for "very" – we assumed it meant it was a "very hoppy" pale ale. We checked with the team at the WA brewery and were told that it's just an abbreviation for "Very Pale Ale".

"So it's very pale in colour then?" we asked. But, again, that wasn't quite it.

It turns out it's because, at 6.5 percent ABV and with a heap of characterful hops in there, when it was sampled in the brewery, they were "a little bowled over by how big the beer was" and declared it to be a VERY pale ale. Which we think means the V could be a little like the X in XPA, maybe bigger, but perhaps not as substantial as the I in IPA. Jesus, the style Nazis could have fun with this...

What we do know is that this is the latest experimental brew from Nail – something they do whenever there's a spare tank in the brewery – and is a big American style pale ale, golden in colour and dry hopped with American hops Azacca and El Dorado and Australian Galaxy that should lead you to "expect bold tropical fruit flavours". It's keg only, appearing out west first then moving eastwards.