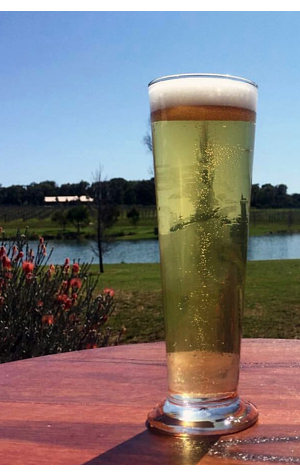 Sad to admit there's a sense of disappointment around Crafty Towers with the latest seasonal from Cheeky Monkey. Nothing to do with the beer (which we've not actually tasted, just been told about). It all comes down to the photography. Head brewer Ross Terlick had been doing a fine job of sending through images for each new beer that featured at least one cuddly, stuffed monkey and usually some other props too; this time around, there's just a beer in a glass against a beautiful Margaret River springtime sky.

Maybe Ross is confident the beer can speak for itself, maybe it's because he knows what a crappy winter we've been having in Melbourne and just wants to rub it in. Either way, the beer is something out of the ordinary – possibly even the first of its kind brewed commercially in Australia, he reckons.

It's a Grodziskie, a Polish style of beer once known as the "Polish Champagne" at the height of its popularity in days gone by. It's an oaky, smoky beer style made with a grain bill that's 100 percent oak smoked wheat malt (or Eichenrauch Weizenmalz to give it its original name), brewed like a Kolsch (ale yeast fermented closer to the cooler temperatures used to ferment lagers) and hopped with melon-y Aussie hop Summer. He says it's "pale gold with high carbonation [and with] complexity that belies its 4.4 percent ABV. A perfect accompaniment to the start of the sunny weather."