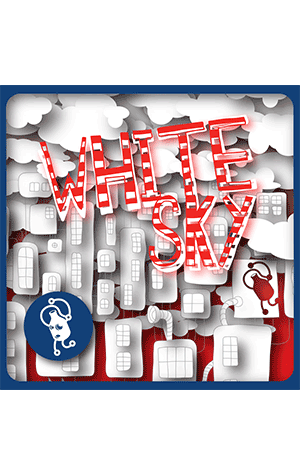 In 2014, Shenanigans released Red Sky, a rather lovely IPA infused with jasmine and hibiscus. It was received well enough to warrant being brewed a couple more times before the brewers made the call to pull things back and make it a once a year, post-winter seasonal. As September 2015 rolled around and Spring duly sprung, Red Sky reemerged but also brought with it a new drinking buddy in the form of White Sky.

“It came to me in a dream,” said Shenanigans co-brewer Sam Haldane in a matter-of-fact manner that confirmed it wasn’t just a clever line. Brewers do presumably dream about these sorts of things but to have a recipe come out more or less fully formed is surely a rarity so he swiftly set about bringing the dream to life by brewing a test batch. The resulting beer, later taken to a commercial scale, was an amped-up Belgian style witbier with added coriander and orange peel (common adjuncts of the style), along with slightly more unusual additions of chamomile and jasmine – the latter connecting the Red Sky and White Sky and making them sort-of companion beers.

At 6.5 percent ABV it's bigger in most regards than the average locally brewed witbier – a good comparison might be Zephyr, the much-loved imperial/double witbier from fellow Sydney gypsy brewer Doctor's Orders – and it dishes out the corresponding amount of floral and fragrant characters, aided by dry-hopping with Galaxy and Mosaic hops (once served, give it a few minutes for the immediate chill to wear off and all these characters will reveal themselves like an exhibitionist on holiday). If you wanted a measure of whether this beer was a dream worth pursuing, consider that we offered a taste to someone normally put off by witbiers and saw them not only finish that bottle but the next one from the fridge. Hopefully Shenanigans have a dream journal…