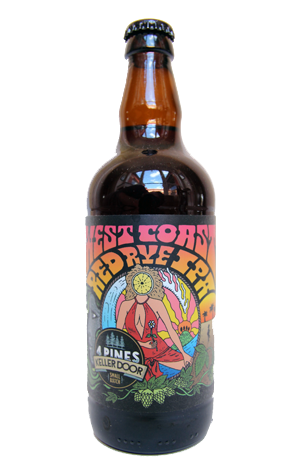 The "fresh is best" concept is something that’s increasingly come to the fore in the beer world as more drinkers grasp the general idea that, at least as far as hop forward beers are concerned, the sooner you drink a beer the better, and more as the brewer intended, it should be. Much of that, of course, depends on how quickly the brewer can get a finished beer out of their fermentation tank and into your mouth via distributors, bottles stores and bars. For the last couple of Keller Door limited release beers, 4 Pines have been pushing the envelope as far as they can with venues in close proximity to the brewery taking delivery of beers that rolled off the packaging line as little as an hour before. They’ve long been sticklers for quality – and are currently the AIBA Champion Large Australian Brewery and join CBA Champion Large Craft Brewery because of it – so giving their beer the best chance in the wild is only natural for a proud parent, particularly for a beer like the West Coast Red Rye IPA.

It uses the same Citra and Amarillo hops you’ll find in their regular pale ale, only here they’ve been dialled up. But it also has rye in it and that, as much as anything, is this beer’s defining character. In the interests of comparison, we asked a couple of Sydney brewers of US-style rye ales what might be a "usual" amount of rye to use in a beer and somewhere in the area of 10 to 20 percent seemed to be a bit of a sweet spot. This is due to rye being a bit fiddly to brew with in a technical sense and, from a flavour perspective, the more rye you use the more spicy characters you’ll get. That 4 Pines’ effort uses 50 percent rye lets you know the brewers haven’t been afraid to hold back or put in the hard yards; apparently, this beer holds the unwanted mantle as having been the longest single brew day in 4 Pines’ history: 18 hours, which is more than double a standard brew day.

The result is a meeting of hops and malt with big characters, a meeting in which neither wins, instead sharing the podium in a chests out manner. Hops are of the orange citrus character, lending some resinous marmalade bitterness too, while the hefty malt bill throws up some nutty, treacly action alongside the spicy rye. As a package, it's the usual well balanced 4 Pines affair, going down clean and easy, particularly for a 7.3 percent ABV beer.