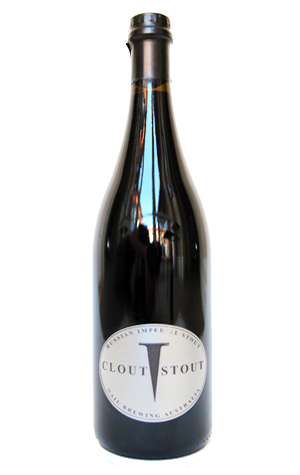 A couple of years back, we featured imperial stouts in one of our Blind Tastings. It goes without saying that it was an epic evening. The two top scoring beers were Courage's Imperial Russian Stout (the first ever imperial stout, no less) and Nail's Clout Stout. The lineup featured three vintages of Clout and it was the oldest that took second spot, in part because the age on it (it would have been released two years earlier) had brought out a softness, richness and creaminess that was still developing in the newer vintages.

Clout is back for a fifth time and has been held back a full nine months since bottling before being allowed into the wild by brewer John Stallwood. Whether it's due to that extended period of conditioning at the brewery or tweaks to the recipe this year, the beer already has those luscious, creamy qualities that took longer to develop in more recent releases. There's little in the way of big roasty or bitter characters, instead Clout '15 is home to more decadent flavours and aromas: creme caramel, figs, mocha, chocolate, vanilla and sweet liquorice. It becomes increasingly liqueur like as it warms; so velvety, in fact, that it's hard to believe it's a 10.5 percent ABV beer.