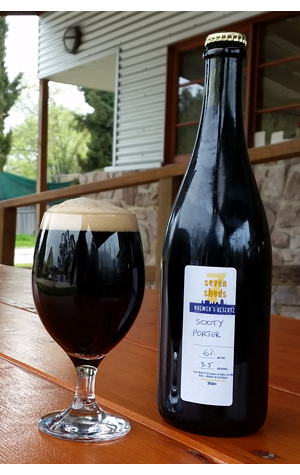 The team at Tasmania's Seven Sheds continues to showcase the talents of the island's diverse craftsmen and women with its latest one-off release. Sooty Porter was created in partnership with Adam Bones of the Tasmanian Cask Company, which re-models bourbon, port and muscat barrels for the island's growing number of distillers. But this was no "pop a beer into a cask and see what develops" occasion; this was something entirely different.

Willie Simpson and his brewers obtained wood shavings from port and bourbon barrels from Adam and used them to smoke some pale barley in one of their seven sheds, using a process they'd developed when creating this year's batch of Smokin' Bagpipes. Previously, they sent malt to Lark Distillery to be peat smoked but this year Lark provided a bucket of peat from their bog in the Tasmanian central highlands, which Seven Sheds set smouldering and blew the smoke up the rear-end of their mash tun with the grain laid out on the screen floor.

According to Willie: "Apart from the trial and error involved, our smoking technique is fairly time-consuming, with the grain having to be smoked in several batches, for up to 12 hours at time. Still, we reckon the results were worth it, even if I ended up smelling like a kippered herring for days on end."

The beer was brewed with staff from Hobart venues, the New Sydney Hotel and Westend Pumphouse, with help from Sooty the brewery cat, who apparently took great delight in repeatedly diving into the bag of wood shavings and, ultimately, lent her name to Seven Sheds' latest creation. As for the beer, we're told the smoked shavings "provide enticing smoke-laced notes with hints of vanilla, toasted marshmallow, maple syrup and, um ... soot."