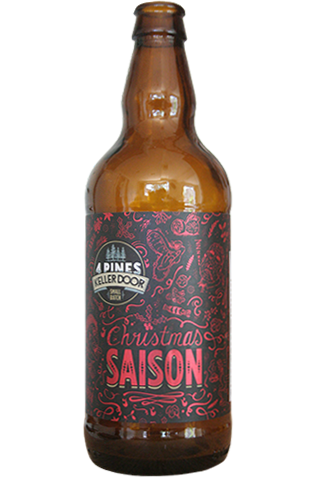 Talk to someone who’s grown up in Europe and they’ll no doubt be able to regale you with some of the oddities that come with spending the end of year festive season Down Under; instead of a white Christmas there’s scorching sunshine; instead of building snowmen people build sandcastles; instead of roasting chestnuts on an open fire you grill prawns on a BBQ. These sort of material differences lend themselves to the idea that traditional Christmas ales – those of the strong and spice-infused variety – don’t always make sense in Australia (at least, not in December). But there’s nothing wrong with wanting to be a part of the tradition; all that’s required is a bit of tinkering with the recipe. 4 Pines have been doing this for the past few years with a beer that mixes a bit of convention with a style more conducive to quaffing in warm weather. It sees them take a blend of half a dozen classic spices – nutmeg, clove, coriander seed, ginger, cinnamon and allspice – and infuse them in a saison recipe to produce a Christmas Saison.

Just as when you’re cooking with these pungent ingredients at home, it’s easy for a brewer with an absentmindedly heavy hand to overdo one or another of the individual elements; everyone knows that annoying feeling of trying to eek out a few desperate sprinkles of spice by tap, tap, tapping on the side of a jar only to be hit with an avalanche that completely stuffs your recipe. Fortunately, all the ingredients in 4 Pines’ Christmas Saison blend together beautifully. The lead is taken up by the natural spiciness from the saison yeast while the aforementioned spices act more like a backup choir, working in harmony and helping lift the entire tune. With a golden colour and excellent clarity, it looks for all money like the kind of beer most Aussies will be drinking around Christmas (i.e. a lager) and, for a beer that’s distinctly more interesting than most of those, it’s just as accessible too; crisp and clean with a touch of sweetness. The only real downside to the Christmas Saison is that come December 25, when you want to sit down and crack a few open with friends and family, it might not be around. It’s available as part of 4 Pines’ "Before, During & After Christmas" pack – along with the brewery's Kolsch, Pale and Citrus IPA – meaning the ‘before’ part leaves you nearly two months to try and resist temptation.