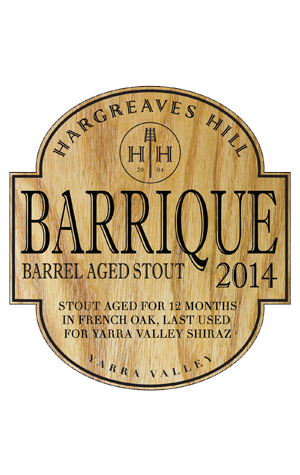 Last year, Hargreaves Hill added a third stout to their roster – kind of. In addition to the Foreign Extra Stout that forms part of their year round lineup and the annual beast that is their R.I.S. (Russian Imperial Stout), they had been ageing a spot of the former in oak wine barriques. Clearly, the operation proved a success as they decided to do it again.

The beer was placed inside French oak last used for a Yarra Valley shiraz for a full 12 months, where it underwent an extended period of secondary fermentation and maturation. According to the brewers: "Several months of contemplation yielded a blackened, oaky beer of intensified breadth and depth."

What that means in terms of flavours and aromas is that the chocolate and coffee you find in the original "take a backseat to a deepened acidity, rich sweet liquorice and dark berry malt characters upfront, giving way to a dry, textured finish that continues to dance across the palate long past the final encore."

It's keg only and said kegs have been appearing occasionally and randomly so if this sounds like your kind of thing maybe check with the venues listed – or on Now Tapped – to see if they are pouring it when you plan to pop in.