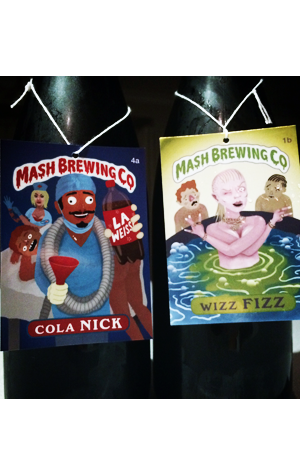 The two new releases feature a brand new beer, Cola Nick (in which the pun becomes rapidly apparent once you spy the swinging, Simpsons-referencing neck card), and a new version of Wizz Fizz (the one with Yolandi Visser letting things go in a jacuzzi). Cola Nick, as the name suggests, is an attempt to follow Purple Stain's recreation of Brendan's much-loved grape drinks of his youth with a recreation of Coke lollies in sour German beer-inspired form. Thus into the base beer went all manner of herbs and spices plus the "inimitable cola acid [E338]" with the result a beer that looks rather a lot like Yarra river water but tastes far better, not too dissimilar, indeed, from the cola bottles of youth Brendan was aiming for.

As for the new Wizz Fizz, it's a big step up from the first: cleaner, sharper, with an appealing acidity and a tart fruitiness to both the aroma and the taste. When they launched the series and made it clear that Wizz Fizz would be the only returning beer, it seemed a shame as it was the weakest of the opening salvo. Right now, like Ninja, I'd happily go another round in Yolandi's bubbles.