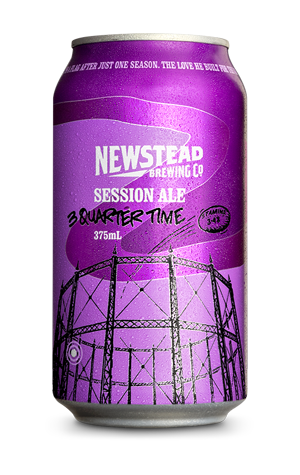 The first time we encountered Newstead's 3 Quarter Time, there was reluctance to give it a go. Not because there was any fear that it would be terrible, but because it was not long after 9.30 in the morning and we had a long day on the road ahead visiting breweries and venues around South East Queensland. We'd called into a Brewsvegas at which men were enjoying a brewing, BBQing and barbering workshop at Brewski.

And weren't we glad we were cajoled into accepting a bottle as it's a mid strength that punches well above its weight, with soft grain, stone fruit and citrus aromas combined with an impressively full body and a tight, drying bitterness. Sure, we needed a coffee afterwards for the drive up Mt Tamborine and on to Currumbin Waters that followed, but we didn't regret starting the day with a beer. It's since gone on to win Champion Specialty Beer at the Craft Beer Awards, quite a feat for a small beer in a category that will have attracted all manner of weird and wonderful.