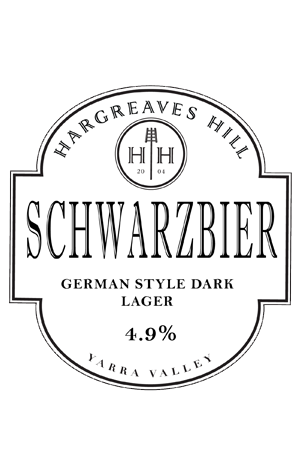 During 2015's Sydney Craft Beer Week, Frankie's Pizza went collaborating with many of its brewing buddies. Among those to take part was Hargreaves Hill, with the result of their meeting of minds a black lager that went on tap at Frankie's as the Iron Eagle but has been tagged the more Hargreaves like Schwarzbier for its wider release by the brewery.

The brewers looked to stay true to the style's German origins, lining up "notes of chocolate, coffee and vanilla derived from roasted malt", "a gentle hop bitterness from noble hops and European pilsner, Munich and roasted malts" with the resultant brew "surprisingly soft and elegant" apparently.