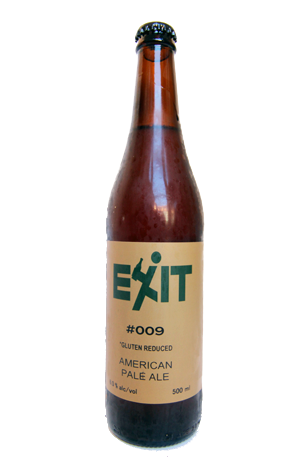 With a coeliac inhabiting Crafty Towers, we're fully aware of the evils of gluten; indeed, the bastard has been tagged Vladimir Gluten around these parts. Actually, that's over-egging the pudding; The Crafty Pot is what's termed a "classic coeliac" and thus reacts to gluten like one of those science experiments at school where your physics teacher pulled out a couple of common or garden items, popped them inside a container and, lo and behold, there was a rapid swelling followed by a fountain like eruption. [Not sure that's the kind of image brewers want associated with their beers – Editor]

However, we understand that below the level of "classic coeliac" are various levels of gluten intolerance, from those people that suffer physical annoyances to those folks commonly referred to as "pain in the arse fad followers". However, given anyone on that scale (excluding the classics) is still a potential beer drinker, they are being catered for on a greater, albeit niche, level by a small number of craft brewers here and abroad.

The way in which Exit has turned this APA into a beer with a gluten level of less than 1.5 parts per million (which we're assuming is damn low) is by the use of a magic enzyme that takes great joy in hunting down little Vladimirs and annihilating them. Thus, there's no need to ditch malted barley and replace with the likes of sorghum and millet. Rather you brew as you would then let the enzyme go to work retrospectively. The result here is a relatively light-bodied, pale ale with citrusy, piny hops and a light biscuit base.