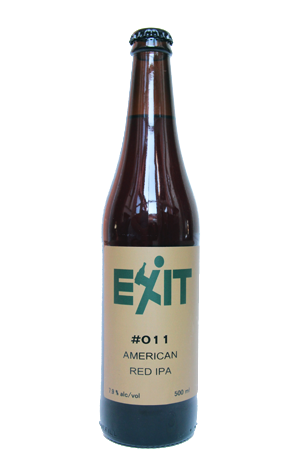 After darting from pillar to post (well, from yeast to malt to hops and back again) for their opening run of beers, the Exit boys seem to have settled into something of a hoppy groove as they move into double figures. Following #009 (the gluten reduced APA) came #010 (a West Coast IPA) and now #011: an American Red IPA. Their final brew at Cavalier's brewery now that they've moved in with their KAIJU! mates is one that looks to ramp up the hops and the malt (as well as coming with a message of loving thanks for all who helped launch their career in beer while at Cavalier).

They've tagged it a souped up version of #005, the Hoppy Amber that we believe will become in some form part of their forthcoming core range, but we reckon it's cleaner – at least in terms of hop character – than its little sibling. It's a lovely deep red drop that's crammed with malts so rich they have an almost fortified fruitiness to them that's reminiscent of an English old ale or Belgian dubbel, albeit with the yeast derived fruitiness of those styles replaced by the rather different citrus fruit characters obtained from liberal application of their beloved US hops. As farewells go, it's a joyous one.