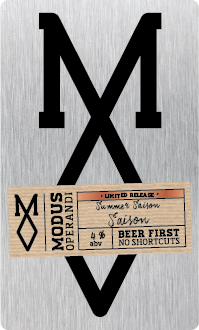 From day one, it’s been clear that Modus Operandi don’t mind experimenting with a saison or three. Launching with the spicy Pepper in the Rye and ‘Funky Orange’ MOFOS, they’ve followed up with one made with passionfruit, one with honey and a sub four percent ABV, poetically licensed bastard pilsner blend named for Elton John’s exquisite Tiny Dancer. The sixth and latest is the Summer Saison.

The idea here was to keep things pretty traditional and pretty French. To that end, they’ve used what might be labelled on modern packaging "a rustic combination of ancient grains": barley, wheat, rye and spelt. Into that they threw black pepper, coriander and, in keeping with the authenticity, a region-specific yeast strain (exactly which region that is, we’re not sure – they say it’s to capture “the days of olde”, which we’re going to go out on a limb and assume means something from nord-pas-de-calais or the 1800s, or both).

Anyhow, it’s got hops you’d certainly not have found in olde times – Motueka, Wakatu and Simcoe – which means it should have more hop impact than a traditional saison, thus it’s inclined to satisfy the modern day drinker who, by day’s end, has suffered a mental barrage from ploughing through Facebook posts, rather than the physical toil of ploughing fields, and requires a beer with more punch than quench. Still, it’s meant to be dry, sessionable and built for summer evenings, whatever your endeavour.