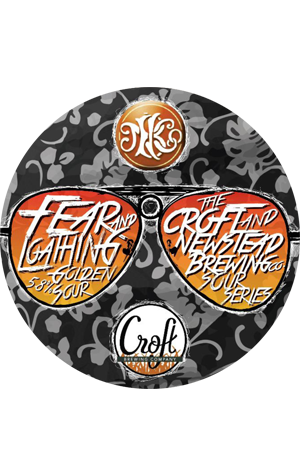 One imagines there was a fair amount of fear around South East Queensland when the weekend's storms battered all and sundry, while there could be a spot of loathing among those who suffered worst at the hands of the gold ball sized hail and ferocious winds. Indeed, The Scratch's cry of "Pucker Up" for its Weekend of Tartness could have easily been replaced with "Buckle Up", but for those who braved the elements and made it to the safe harbour of the Milton bar there was a chance for a first taste of the third beer in the "kettle sour series" of beers from Newstead and Croft.

Fear and Loathing is described as a beer in which things were kept simple: a very pale malt bill and "exorbitant dosing" of Cascade hops. Said dosing took place in the whirlpool and for dry-hopping, leading to an "acid-fuelled kettle sour" in which the "grapefruit and lemon characters will have your mind going full gonzo, while the crisp finish will prevent you from remembering what just happened."