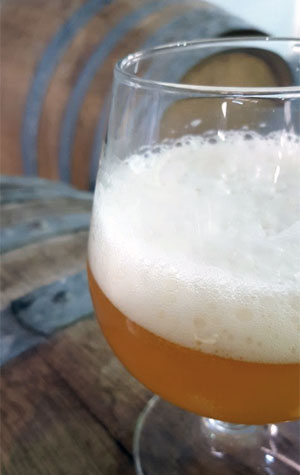 It's not too long ago that Hargreaves Hill released its first ever sour ale. These days, they're coming thick and fast. The latest is a Belgian-inspired affair: their attempt to recreate a lambic style ale, something they've done with the use of multiple stages of fermentation, oak barrels and a dash of funky yeast and bacteria.

It started out with a 72 hour lactic fermentation pre-boil, a process that allows the development of naturally formed lactic acid. Then, post boil, the beer went through a traditional ale fermentation, with the hoppy, sugary wort feeding a more standard ale yeast. Finally, rather than leave the yeast to fully ferment the beer, it was stopped three-quarters of the way along, transferred to pinot noir barrels, at which point the brewers introduced a form of the yeast strain brettanomyces to one barrel and bacteria pediococcus and lactobacillus to two others.

We're told this "complexified the beer remarkably" and gave it "a thirst slaking dryness". Each of the barrels was then tasted and blended with a small amount of new beer for added nuance. At the end of all this, you can expect a straw coloured, slightly hazy beer with "a light leathery and lemon blossom" aroma, "a delicate acidity [and] a remarkably creamy mouthfeel, a hint of bubblegum, with some zesty lemon character", not to mention a restrained oak character. The evolution of the Aussie beer scene continues apace!