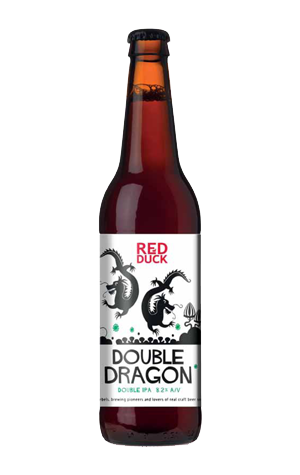 In the midst of celebrating its 10th birthday and working on a new look for its limited release beers, Ballarat's Red Duck has also been in the process of bringing its sales and distribution back in house. As such, you can look out for a relative glut of new, one-off beers appearing in the coming weeks that were held back while the transfer took place.

Among them is Double Dragon, a beefed up 10th birthday version of Golden Dragon, the strong Celtic ale that's one of brewer Scott's favourites from the 100-plus beers he's released to date. It features 10 of his favourite hops – Aramis, Amarillo, Bramling Cross, Cascade, Chinook, El Dorado, Legacy, Mandarina, Mosaic and Simcoe for those taking notes. That said, for all that there are 6kg of hops and 70 IBUs of bitterness in there, the underlying big, rich, malty beer will not be denied, making for a beer that's still as much strong Celtic ale as it is double IPA.

Also out is Binabadladdie, a Scottish export ale style beer sent to a couple of venues for St Andrew's Day (meaning we're a wee bit late with this listing. This time, instead of going overboard on the hops, Scott lined up a smorgasbord of favoured malts – Maris Otter, imperial malt, premium English caramalt, special roast, oats and a small amount of peat smoked malt. On top of that, to boost the maltiness, instead of using water, he added the grist to an ale boiled up the day before "to add more caramelisation, and for extra malty flavour!" Add to that a couple of bottles of best single malt whisky added on bottling day and you've got one uber-malty, uber-Scottish beer that Scott reckons will "totally rock your sporran".