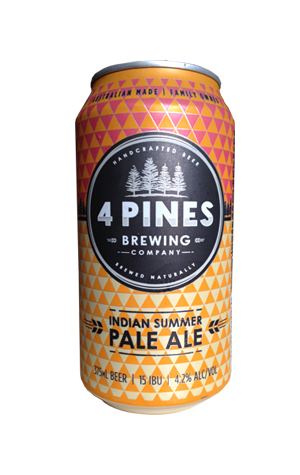 You need only keep a loose eye on the news to come to a conclusion that the climate is pretty buggered. Melting ice sheets, floods, fires, violent tempest; it’s all a bit grim really. And the unfortunate thing is there’s probably not a lot the average person can do about it. So, we look for positives: those wonderful moments between cataclysmic events where the world is just so gloriously habitable for humans that you stop worrying about the forthcoming plague of locusts. One such lovely occasion is an Indian Summer and, the next time one hits, we hope it’s 4 Pines rolling around with the drinks trolley.

The Northern Beaches brewer has just added the Indian Summer pale ale to its range: a sixth core beer and the first to be offered in canned form. In terms of where it sits alongside the rest of the 4 Pines family, it’s a quaffer whose closest sibling would be the Kolsch. With the words “summer” and “pale ale” on the side of the tin, it’s pretty much a banker in terms of what you’re going to get when you to run down the checklist of such beers: Crisp? Yes. Easy-drinking? Certainly. Quenching? Undoubtedly.

But the simplicity of the ale and wheat malt bill, coupled with the beer’s overall cleanness, lets what’s a reasonably mild hop character come through more than it otherwise might, with Equinox and Galaxy hops adding some passionfruit aroma and a satisfying bitterness that doesn't so much bite but keeps nibbling away gently. By no means is it a challenging beer, but at the end of a hot day you’re not often up for any challenge beyond seeing how quickly you can get a cold beer near your face. Indeed, the real challenge is limiting yourself to one. Handy, then, that it comes in four packs.