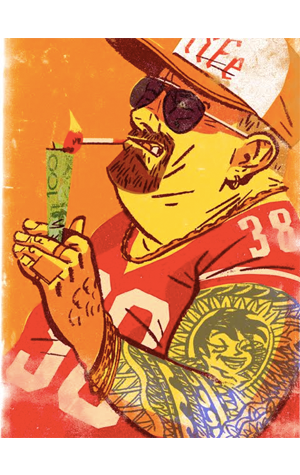 Plenty has been going on at Tooborac Brewery in 2015. It's bigger thanks to the installation of Garage Project's old brewery, it has a striking brand new look and has been producing a series of often off kilter limited releases, a sour saison and chilli chocolate stout among them. However, while they may have nudged the envelope for some of those limited release beers this year, for their final beer of the year they've kept things rather simpler.

The Ca$hed Up Summer Ale is a simpler beast, one designed for quaffing through the hot Aussie summer. The brewery says it's inspired by the "inimitable Australian drinker – the guy that epitomises what beer WAS in Australia". They say it's a beer the "typical C(Cashed ) U (Up ) B (Bogan) can and will want to drink" and are calling on "each and every beer advocate to help our inner circle Bogans this Christmas" and try something different, that thing being "an amazing and subtle ale at 4.3 percent made in Victoria by a real microbrewery."