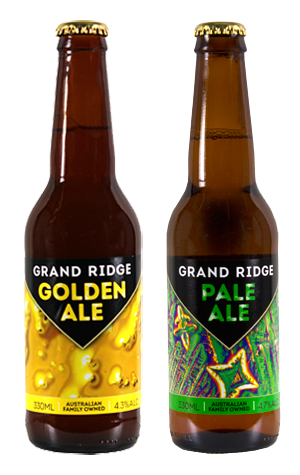 There's been much talk about branding in the local beer world recently, with many brewers undergoing total facelifts and others tweaking. One brewery that has stuck to its guns when it comes to its longstanding, traditional look and feel is Grand Ridge, the oldest microbrewery in Victoria. But over the past year, we've been aware of discussions about a refresh and now the first results of those discussions are out.

The Golden Ale and Pale Ale don't just come with a new look for Grand Ridge, but add to its broad roster of beers too; we understand, however, that there may be pruning elsewhere in the range as the evolution of Grand Ridge continues. The beers, which are available separately as well as in mixed four-packs (two of each) at BWS, sit fairly and squarely within the most popular area of the current craft beer market in Australia. The Golden Ale features Galaxy, as the brewers seek to capture its passionfruit characteristics, plus wheat for a drying tartness. The Pale Ale takes the lead from America and features a trio of Aussie hops – Ella, Topaz and Enigma. We're told it offers "classic floral, spicy and fruity notes" with a "lingering dry finish".

As for the bold and colourful labels, they're the result of having each of the beers crystallised and then put under a microscope at 1000 times magnification.

Available in First Choice and BWS plus limited tap points