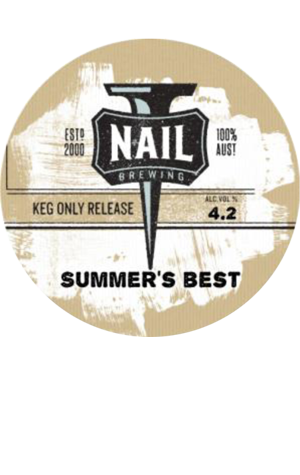 It's been a big year for WA's Nail. The brewery turned 15, stepped up its interstate distribution and underwent its first major rebrand. At the same time, medals and trophies kept coming, including those for fine new releases such as the Flaming Lamington chilli chocolate stout.

The year is ending on a rather more straightforward note than a beer that looks to recreate one of Australia's favourite desserts (with added chillies), with the final keg only release a hoppy session ale called Summer's Best. It's one brewed with all Australian malts and Australian Galaxy hops for bittering before being finished off with a spot of dry hopping with American El Dorado and Citra hops.

We're told Summer’s Best has "a stunning nose full of stone fruit with a hint of citrus that follows through to a fresh and bright palate with a balanced bitter finish." It comes with a mere 4.2 percent ABV, making it "more of a cuddle than a tackle".

And other good beer stockists in WA

East Coast venues to be added