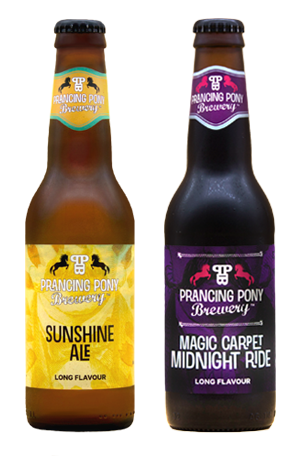 The brewers at Prancing Pony, in the Adelaide Hills, have released a number of specialties throughout 2015. So, having received info and samples – and with a few days of the year left – we figured we really should get them listed on the site. There are four to come, with these the first two of them.

Sometimes simple is better and that is exactly the case with the Sunshine Ale. Made from 100 percent pilsener malt and hopped up with only one hop variety, Citra – albeit at six stages in its development. Such lavish hopping helps the Sunshine Ale become something more than just another easy drinking session beer. Pouring a straw colour, it's a blonde ale with a moderate bitterness, a citrus kick and a dry finish that leaves the drinker wanting another.

[UPDATE: Sunshine Ale is now part of the brewery's core, year round lineup.]

For the Magic Carpet Midnight Ride, Prancing Pony has ventured into imperial stout territory. Their first ever stout sees them go big with 9 percent ABV, 60 IBUs [International Bitterness Units] and a 500ml bottle as it's part of their Thoroughbred range. The name describes the appearance perfectly, presenting a deep black, midnight colour with a chocolate cream, off white head. The typical aromas of chocolate and coffee come through on the nose, with a light whiff of booze there too. It's thick and creamy from the off, floating around the mouth and leaving velvety flavours behind; one midnight coloured Pony that's happy to buck and kick all through the night.