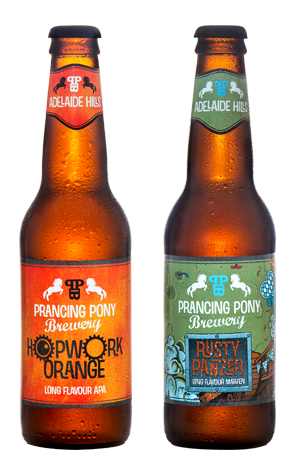 The final pairing of our catch up on the four limited releases to come out from Prancing Pony in recent months features their latest and one that takes inspiration from the brewery founders' mother country. Their latest is Hopwork Orange, the idea for which sprung from brewer Frank Samson's decision to add more than one easy drinking ale to his lineup, one a little fuller in flavour than a traditional summer quaffer. The Burgess / Kubrick referencing title first makes sense when it hits the glass: a light orange, tangerine appearance heralds an easy, subtle citrus hop aroma starting a journey through a tropical fruit orchard. Some light malts balance the hefty 50 IBUs of bitterness, creating a beer that slides down easy without compromising on flavour.

[UPDATE: Hopwork Orange is now part of the brewery's core, year round lineup.]

With the Rusty Panzer, the Prancing Pony team heads back to its German roots. Panzers were feared German combat tanks used in World War II, while the rust of the title part relates to the Oktoberfest style lager's amber appearance. Subtle caramel aromas up front are followed by clean, sweet toasted malts and some dry fruit and raisin characters, with traditional German hops Hallertau adding their subtle touch.