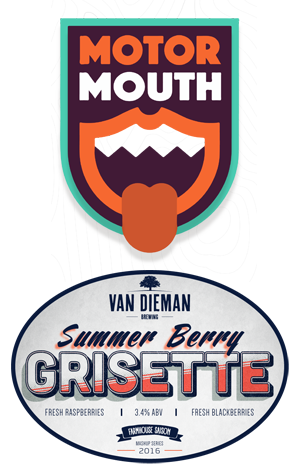 With each passing year, it seems that Will Tatchell at Van Dieman is having more and more fun. He added a fine barley wine aged for a year in muscat barrels to his lineup late last year, is planning to create an "estate ale" featuring ingredients all sourced on his family's farm and is now embarking on a spot of blending at this summer's Tassie beer festivals.

Making up part of those blends are two new releases which you can also enjoy as standalones. The first is Motormouth IPA, named in honour of a Will's dad Robert, who apparently never stops talking, and piled high with fruity American Amarillo and Mosaic hops that deliver a melange of fruity mango, citrus and passionfruit characters plus some woody touches. He's not held back on the malt bill either, giving the beer a full body.

The other new release is the Summer Berry Grisette, his take on a Belgium farmhouse table beer. Low in alcohol and delicate in nature, the base beer was fermented in open top fermenters before moving to Chardonnay barrels into which were added "truckloads" of raspberries and blackberries. The result is a peachy pink beer that doesn't look too dissimilar to a Bellini and is light on the palate, with a hint of sharp tartness, plenty of soft berries and a touch of tannic bitterness.

As for the proposed blends, one is the Grisette with his white ale, one Grisette with his oatmeal stout and the third Grisette with Motor Mouth. Will sent us samples of the three, with the second, which he's tagging Black Forest Gateau, our favourite. Find the Van Dieman stall when it pops up at the summer's festivals if you want to try them for yourself.