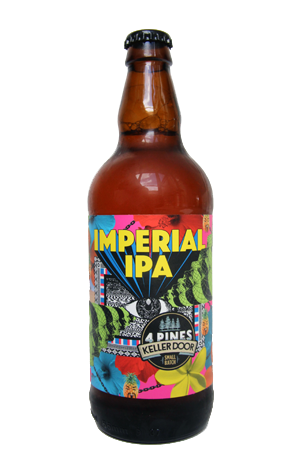 The days when 4 Pines would use its occasional bottled Keller Door releases to give drinkers something a little different but not particularly wild to try would appear to be long gone. Where once there was Marzen and Amber Mosaic, last year saw the bigger, frequently hoppier, likes of the Citrus IPA, West Coast Red Rye IPA and barrel aged Baltic Porter take centre stage.

Now they're opening their 2016 account with the biggest and hoppiest Keller Door to date, the 9 percent Imperial IPA. Looks wise (externally at least) it continues along the psychedelic tip of the aforementioned IPAs, all third eye and geometry, while looks wise once in your glass it's pretty gorgeous: a glistening bright copper pour.

The label declares it to have a "fat malty body", but that's overstating things; slightly viscous and a little sticky, perhaps, what with all the pale malts needed to host the hops in comfort, but far from fat or chewy. Indeed, for its size, it comes across as fairly light on its feet, delicate even, and while the ripe pineapple, sherbet and slightly dank aromas don't exactly clobber you, they're an indicator of the layers of tropical hop flavours to come.

The bitterness, again, isn't as fierce as the label might have you expect – to be honest, we suspect the brewers at 4 Pines are too good to release anything that isn't finely balanced, even at 84 IBU – but is more of the flavourful, lingering citrus peel type; expect drinkers who love nothing more than having their palate shredded to complain accordingly. Indeed, while it's been a long time since Epic's similarly lightfooted Hop Zombie passed the Crafty lips (there's too much Aussie beer to keep on top of to do much shopping around), this IIPA could make for an interesting side-by-side.