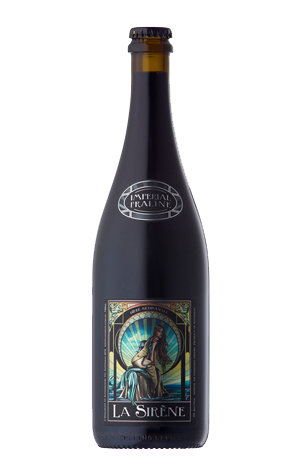 It's fair to say La Sirene's Praline got off to a reasonable start in life. The first dark beer from the Melbourne farmhouse ale lovers debuted at GABS in 2014 and took out the People's Choice. Drinkers were wowed by its layering of hazelnuts, cacao and vanilla and, as a result – and not necessarily planned – the brewery quickly added the beer to its year round offering.

Clearly, they're glad they did and are rather enamoured of the beer and its success too as they've decided to give it a bigger sibling. The Imperial Praline is a few notches higher in terms of booze, features a tweaked malt bill, twice as much of the "hand scraped" vanilla and an additional load of cacao. The result is a beer that is at once familiar to anyone who's tried the first yet with its own personality too.

It pours an impenetrable black with a deep brown head and, like a good red wine, rewards a little time sitting once taken from the fridge, both to allow the flavours and aromas loose but also to allow the carbonation to chill and let the full sensuousness of the beer evolve. The hazelnuts remain prominent on nose, alongside a hint of boozy chocolate liqueur. It's fuller in body than its predecessor, leaving the creamy chocolate, toffee and vanilla to cling lovingly to your palate, while, late on as it continued to warm, we detected a welcome salty, leathery touch too.

And other quality beer outlets