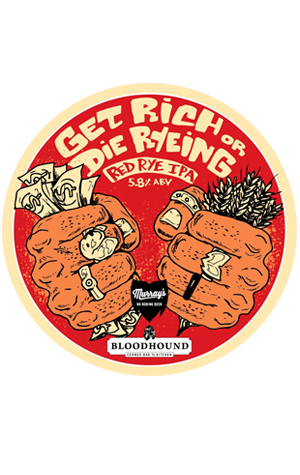 For Brewsvegas 2016 the team at Brisbane’s Bloodhound Bar decided to resurrect Hopfields, an event they’d held once before, towards the end of 2015, during which they dispensed a huge range of very hoppy beers over the course of a weekend. For round two they teamed up with the hop fiends at Murray’s to add a collaborative beer to proceedings.

The recipe development was a joint back and forth effort, with the Bloodhounds deciding on a Red Rye IPA, the Murray’s team taking ownership of the malt bill before being passed back to the bar team to decide on the hops to be used. That last part was more of a hands on process, as the Bloodhounds headed to Port Stephens for a brew day and worked their way through the brewery’s stockpile of hops to pick out their favourites.

The result saw a trio of hefty US hops – Amarillo, Citra and Mosaic – used, plus a hop back jammed full of Riwaka hop flowers from New Zealand. The word out of the brewery is that drinkers should expect a beer that’s “rich, amber red in colour” with “a moderate to high hop aroma of berry and citrus fruits” and a “resinous mouth feel from the large amounts of Riwaka”.