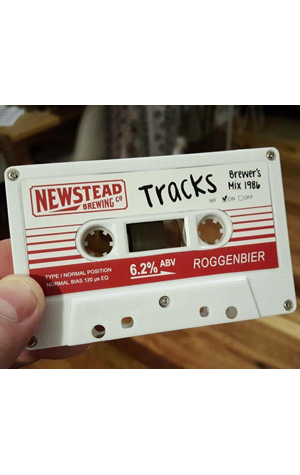 They've gone a little fancy with their latest small batch release at Newstead. Not just with the beer but with the way you'll spy it on one of the handful of bars upon which you'll find it. Their policy is to name such releases after old Brisbane clubs and venues, with the Tracks here one that existed in the 1980s. Thus there's a nod to the decade in its decals, which have been quite the mission...

As for the beer, it's a roggenbier, a seldom seen German style of rye beer that was launched as part of a Brewsvegas event at Tippler's Tap. There's a serious amount of full-bodied, spicy rye in there too: a whopping 40 percent of the grain bill, which was joined by German and English hops and the classic Weihenstephan wheat beer yeast. The result, according to the brewers, is "an all wheel drive of spice, mint, earth, clove and fruit."