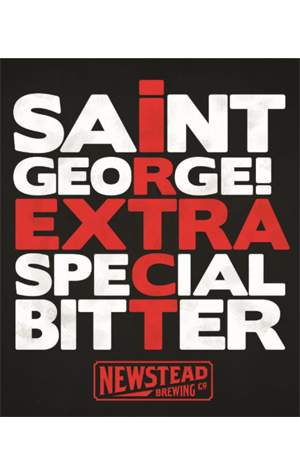 It's a little early in the piece for this beer to have been brewed for St George's Day, the national day on April 23 on which some English celebrate their patron saint by getting lairy, suggesting foreigners bugger off back home and occasionally going on a march. Of course, some celebrate it by being genteel, tucking into traditional English fare and knocking back a pint of three of malty English ales, but they tend to be drowned out by the flag-waving, boisterous loons (sound familiar?).

Perhaps the beer is a tribute to the Englishman working at Newstead (Mr 250 Beers) or maybe it's just a beer the brewers fancied making, what with limited releases seeming to come from the Brisbane brewery every few weeks. Either way, in the release notes they've done a good job of capturing the attitude that lies at the heart of many St George's celebrations...

"While the irony of calling anything 'Extra Special' that hails from the motherland is not lost on us," they start, "we, nevertheless, decided to slay the dragon and have a crack at an ESB. England does very few things well and when it finally manages to, it goes on to see other countries do them better." And so on, tongue planted firmly in cheek.

Newstead's attempt to out-ESB the English features rye, biscuit and caramel malts, East Kent Goldings hops and a traditional Yorkshire ESB yeast. The outcome, aside from the rich maltiness, we're told is "spicy, minty, marmalade-y" and balanced by "fruity yeast esters of pear and pineapple".