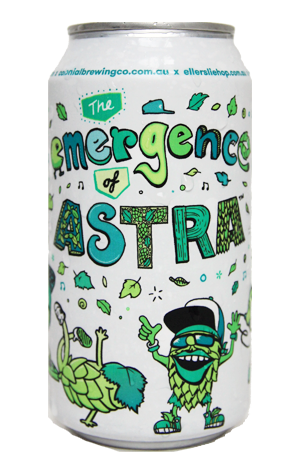 In 2015, Colonial Brewing Co hooked up with the organisers of the Emergence Creative Festival in Margaret River. The result was the design of the cans for the brewery's Small Ale, the hoppy 3.5 percent ABV mid-strength they'd been honing in draught form for some time. As well as the sweet design, the beer saw them debut the 360 degree, flip top cans that effectively become an aluminium glass once opened (turning plenty of heads when The Crafty Pint and friends popped them in the Supernatural Amphitheatre at Golden Plains recently).

Now, the pair has hooked up again and brought a third party into the mix: Ellerslie Hop. The fourth generation Victorian hop farmers have been developing new strains of hops they believe will appeal to craft brewers and drinkers; first was Melba and now there's Astra. It's one oily little beast, which is good as oils are what can give a beer its hop aromas and flavours.

The festival folks have designed the hip hoppy can design (of which there are only 2,500, all being sold within WA), Ellerslie the Astra hops and Colonial a beer with which to showcase both. It's a lager that allows the hops to shine, which they do by supplying rounded peach, grassy and tropical aromas and flavours. For those not in WA, there is a draught version coming out featuring new season Astra too.