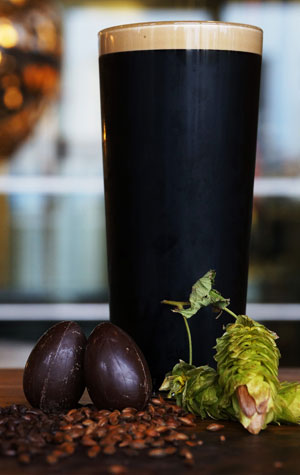 The good burghers of Canberra can get their hands on a fresh hop beer with the release of Reflector by BentSpoke. The beer has been brewed with wet Galaxy hop cones delivered straight to the brewery from the Rostrevor hop farm in the Victorian High Country. It's a red amber ale, comes with a bicycle reflector tap handle to reflect its hue, and its fresh hop character doesn't end when the beer makes its way to the tap; Reflector is being served through the brewery’s bar top infuser known as the Hopinator, which is packed with more Galaxy hops.

It's not the only new beer pouring at BentSpoke. In response to punters' requests for more dark beers as the mercury starts to dip, head brewer Richard Watkins has created a robust porter called Fugg’n’Chino, named after the two dogs he and partner Tracy Margrain own. The dogs are named Fuggles and Chinook., the two hop varieties added here to balance the beer's "rich chocolate maltiness". This one is being served via hand pump.

Also making a return is the very first beer to pass through the Braddon brewery: Dick Tracy. It's a nutty brown ale that developed a cult following when first released and returns after a long absence, featuring a blend of chocolate, crystal, and Munich malts balanced by "a generous helping of Citra, Cascade and Fuggles hops".

Look out for more big beers to follow over winter. “We’ve a few more surprises up our sleeves before autumn’s out,” says Richard. “True to our followers, we’ve got a few more darks on the way, not to mention our 'biggest' beer yet..."