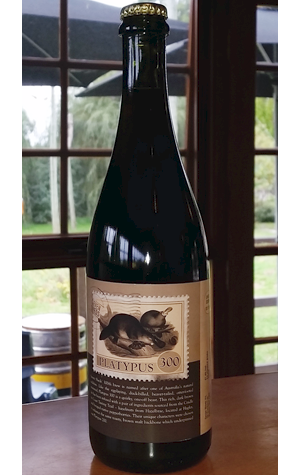 Willie Simpson and his team rarely need an invitation to get a little adventurous with their brew day recipes, frequently incorporating unique or unusual ingredients – and on occasion sending beers on long journeys by sea before presenting them to the public. Thus, when a special occasion does come around, such as the Tasmanian brewery's 300th brew since starting out in 2008, you know to expect something a little different.

For Platypus 300, they've once again decided to showcase some of the other local producers that call the northwest of the state home. The dark brown ale has been infused with hazelnuts sourced from Hazelbrae Hazelnuts, in Hagley, and foraged pepperberries to create a twist on the style they reckon makes it "just like its egg-laying, duck-billed, beaver-tailed, otter-footed namesake mammal".

“As a member of the Cradle to Coast Tasting Trail, we wanted to use local ingredients which you wouldn’t normally find in beer,” says Willie Simpson. “We think the toasty malt characters of the beer are complemented nicely by the nutty flavours imparted from the dry-roasted hazelnuts, while the pepperberries add piquant notes and a gentle pepper hit.”

Platypus 300 is launched at Hazelbrae Hazelnuts at 11am on April 15 by Federal Lyons MP Eric Hutchinson.