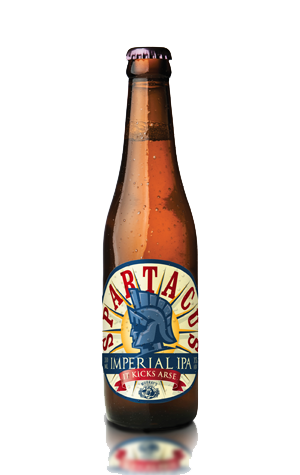 A few years back, in the earliest days of The Crafty Pint, we were notified, rather excitedly, of a beer that was to make its debut at Beer DeLuxe in Fed Square as part of a Murray's tap takeover. The NSW brewery that had given Australia its first widely available double IPA – Icon 2IPA – was set to unleash Spartacus, a 10 per cent ABV, 100 IBU imperial IPA.

Today, such beers might not raise eyebrows quite so high or drop jaws quite so low, given the hop-based armed race that has engulfed much of the beer world in recent years. Yet, its return after a three-year hiatus is another reminder of just how trailblazing the Murray's brewers (initially Graeme Mahy then Shawn Sherlock, now Graeme again) have been on the local scene.

The beer is released as part of a splurge of IPAs coming from Murray's in April (including the Skully red IPA we wrote about recently) and, we're told, is one of 18 different IPAs released by the brewery over its decade in existence. Graeme says Spartacus features "almost too many hop additions to count" with the result a hazy golden beer in which we'd place the dominant hop aroma as apricot, supported by a chewy, almost sticky malt backbone and building, resinous, piney hop flavours and bitterness. As big as its name and "It kicks arse" label tagline suggests.