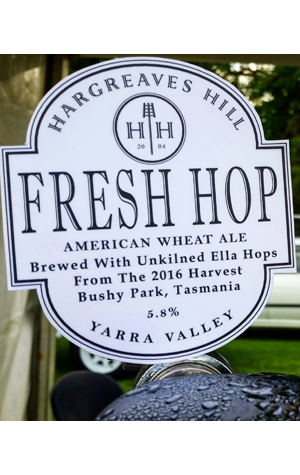 Given what we do at The Crafty Pint is based around words as much as anything else, we always look forward to information on new releases from Hargreaves Hill. Head brewer Kai Dambergs loves to get as floral as a fresh English pale ale while the direction coming from founder Simon Walkenhorst means their beer labels like to describe their beers as things like "fine ales" rather than simply beer.

Thus, a doff of a writer's cap to them for the decals for this year's hop harvest beer. Once again, it's an American wheat style with which they've chosen to showcase fresh hops from Tassie and, rather than describe the hops as "wet" or "fresh", they're going with "unkilned". Lovely (if you're into that kind of thing).

Kai tells us that the combo of local ale and German wheat malts give the beer "a soft taste which is smooth on the palate", while the Ella hops "provide an abundance of sweet fruit characters encompassing apricot nectar, pineapple and sweet orange peel." He says there's a moderate bitterness that "gives a subtle undercurrent to a gentle and seductively hoppy little number."