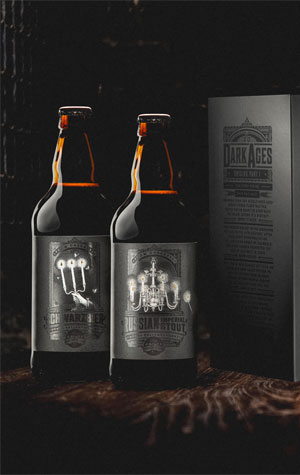 Last year, 4 Pines released its first Keller Door mixed pack, The Bastard Children of the British Empire. Across six beers, the brewery offered drinkers the evolution of the pale ale from its origins in the UK to the various forms found today. And now they're back with another pack that mixes education with enjoyment, as well as offering the brewers a chance to play around with four more beer styles.

The Black Box of Dark Ales features four different brews of a darker hue complete with a potted history of how darker malts have played a role throughout beer's history. In recommended order of consumption, it kicks off with a Schwarzbier (or dark lager), one that from first whiff you know is playing things with a straight bat: soft coffee and chocolate characters, subtle noble hop characters, smooth on the palate.

Beer two is a Coffee Porter and one that would seem to have those with a sweeter tooth in mind. There's coffee aplenty – fruity at first, roasty later on – and a sweetness that brings to mind an iced coffee or a latte to which a dash of caramel syrup has been added.

At the Melbourne launch, the third beer, a Black IPA seemed to find most favour. The citrus and pine aromas appear pretty unhindered by anything that, with eyes closed, would hint at the blackness of the beer in the glass. There's a relatively full body too, one containing an impressive depth of hop flavours in a beer that's nicely balanced, keeping the bitterness in check and leaving a touch of the herbal finish you often find with such beers.

The four-pack builds to a Russian Imperial Stout, one that, at 8.5 percent ABV, isn't as monstrous as many such beers you'll find on the market. Indeed, the aromas of soft coffee, chocolate and dark fruits are subdued, with the biggest impact coming when you take a swig, where the syrupy black liquid reveals liquorice, some roast and cacao plus a touch of tar.