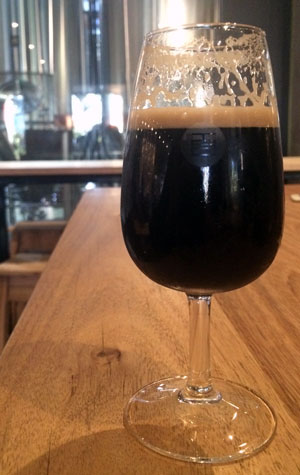 There's been a flurry of new releases from Temple this month. We've already written about this year's Season's Harvest but if you're heading to their stall at GABS or visiting their brewery bar (plus a handful of other venues) look out for a couple of others.

One is the Bold New World, an imperial version of their New World Order American stout. It weighs in at 10.2 percent ABV and let's you know, presenting vinous qualities, a liqueur like dark chocolate character and a touch of cherry alongside the more typical roast and coffee characters you'd expect.

As for the ESB, it's a far more traditional affair than the New World beer of the same name head brewer Glenn Harrison used to brew when at Hargreaves Hill. It's brewed with all English malts, all English hops (Target, East Kent Goldings and Fuggles) and an English ale yeast that lends the beer some distinctly fruity esters. The toasted, biscuity malts dominate the aroma, while there's plenty of earthy hops that linger on the palate.

And select other beer venues

NB some venues listed only have one of the beers