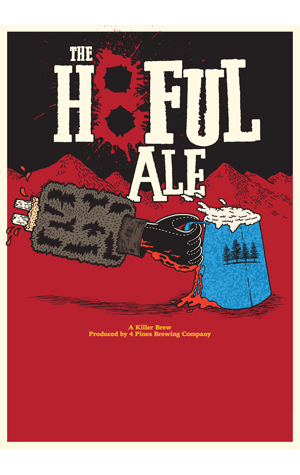 You could have had plenty of fun with Tarantino beer tie-ins. There's the obvious: Jackie Brown Ale. The slightly reaching: Reservoir Bock or Kill Pils. And the please-get-to-the-point-of-this-article: Django Unfiltered or Inglourious Kvassterds. Still, on these shores at least, it's taken until his current release, The Hateful Eight, for one of his films to receive a brewed accompaniment.

The accompaniment to the Blu-ray and DVD release of the violent Western vengeance flick comes from Sydney's 4 Pines (and follows hot on the heels of a beer Two Birds released to mark the launch of the Wolf Creek TV series). It's called The Hateful Ale and is a suitably beefed up brew: an 8 percent ABV Belgian Tripel that we're told "has as much kick as a civil war era shotgun". According to the brewers, what that means is flavours of "nut, banana and clove" plus a hint of sweetness.

It's a very limited, draught only release so eyes peeled if it sounds like your kind of thing.

Select beer venues on tap only